There are several ways to perform a cartwheel, however I will mainly be looking at the hand placement technique and progression towards the round off. The cartwheel is a very influential skill however, as it is the base technique for the round off, and an easy method to assess a gymnasts optimal twisting direction for other skills. This skill is probably the first main twisting skill that a gymnast will learn, and once it has been ingrained into the gymnast, the way they twist here will affect every other twisting and turning skill they perform. Twisting direction is a very complicated and important topic that I will cover in another article.

When I coach this skill I let the gymnast learn it twisting in one direction until it becomes very familiar, only then do I encourage them to practice the other direction to help prevent muscular imbalances. The cartwheel and round off are skills that twist in the opposite direction to what is normal for the gymnast. For example, if the gymnast is pushed from behind and immediately steps forwards with the left foot, and if you ask the gymnast to jump and twist and they do a full turn towards the left, then the gymnast is a left twister. This means that for the cartwheel and round off the gymnast should step into the lunge with the left foot first, however when you observe the shoulders, it will be the right shoulder pulling backwards, a right twist.

The cartwheel can be started standing side on to the direction the skill will move, however I have personally never really found any benefit to this method other than it being an alternative way to add on a second cartwheel, so I only coach it facing forwards. There are three directions one can finish the cartwheel though; facing the direction you came from, facing side on, or facing the direction you were facing to start with. Seeing how the finish all depends on how you pivot and bring your feet together, I refer to these as the step-in, side, and the step-out finish. 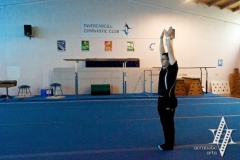 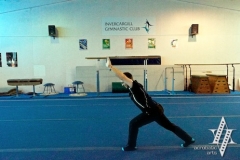 To begin, the gymnast should be facing forwards along a line, with arms reaching upwards against the ears. Shoulders in flexion and shoulder girdle in elevation in preparation to absorb impact. The gymnast then steps forwards and reaches into a lunge with their body at a 45 degree angle.
When they reach this point they can then start to focus on pulling their back leg upwards while the support leg on the floor stays bent and their body leans forwards until it reaches horizontal. Arms should still be at the ears just as the skill started.

Now that the body has reached horizontal, two things will happen. The first thing is that the body will keep moving forwards with the back leg leading the motion, however, now the support leg is going to start to straighten as well to push the gymnast faster. As this support leg straightens, the second action occurs, which is that the gymnasts trunk will need to rotate the body 90 degrees in preparation for the hands making contact with the ground. 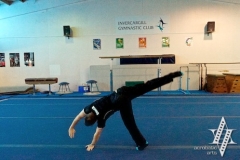 This position has been shown to have the lowest ground reaction forces in a round off, as well as the least elbow adduction, and elbow vertical reaction forces in comparison to having the second hand parallel or reversed [1 & 2]. This means that the T-shape hand position is the most stable position, where as the parallel and reverse hand positions might lead to joint overloading and potential injuries.

(In the images below, the cartwheel moves from right to left.) 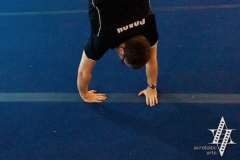 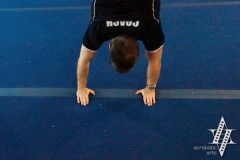 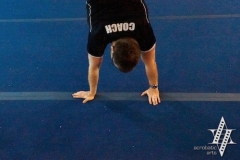 In this last part of the cartwheel, the gymnast continues rotating around the sagittal axis moving through the straddle handstand position while bringing their first foot to the floor.

Once the first foot makes contact with the ground, the second foot should come down next to the first with the gymnast facing the direction they came from. Arms should be pointing towards the ground where the hands were placed.

If performed in a competition it typically looks more aesthetically pleasing to judges if the arms are kept in flexion against the gymnasts ears. In training I prefer arms to stay pointing down as it means the gymnast is reducing their moment of inertia and therefore rotating faster. This is greatly desired for round offs that lead into flic flac, as it means the gymnast will be leaning backwards for takeoff. 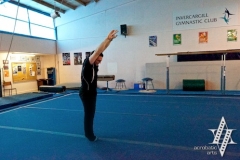 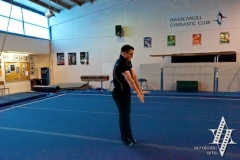 Cartwheel - Round off prep

Once the first foot makes contact with the ground, the second foot should come down shoulder width apart from the first, and along the same frontal plane. Arms for this skill can be kept in flexion against the gymnasts ears, as the next connecting skill will typically be another cartwheel and the gymnast would be turning into another lunge. 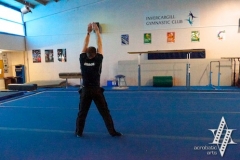 Follow Through – Used to connect into a forwards salto (Step-out)

Once the first foot makes contact with the ground, the gymnast should pivot on this foot to turn outwards and continue facing the direction the cartwheel was traveling along. The second foot should only come in contact with the floor once the gymnast is facing forwards again. In this case the gymnast will want to keep their arms in flexion against their ears, only pulling them in extension to tuck their legs once rotating for the forwards salto.

That completes everything needed for the various cartwheel techniques. 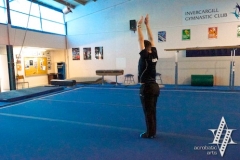 The round off is very similar to the cartwheel, however it will need to be started using a hurdle.
I will cover the hurdle technique in a separate article as it isn’t used specifically for the round off.

The preparation phase of the round off is exactly the same as the cartwheel, the action phase is almost identical, however instead of finishing the action phase in what is essentially a straddle handstand, the gymnast should aim to bring their feet together in a full handstand.

Just as a note, I mentioned that parallel, reverse, and T-shape hand placement has been researched. The T-shape is best, and good to be used by both novice and advanced gymnasts. One technique that has unfortunately not been researched yet to my knowledge, is a technique commonly used in advanced tumbling and some artistic gymnasts, where instead of performing a 90 degree turn before placing the hands down, the gymnast does a 180 degree turn with both hands pointing back to the direction they started from. This is an advanced technique that I would only possibly use for senior gymnasts.

In the follow through phase of the round off, the gymnast should give a strong prop and slight courbette action, allowing the round off to finish with both feet making contact with the floor at the same time. The feet should be slightly in front of the hips, with arms pointing to where they were in contact with the floor to reduce the moment of inertia and allowing for faster rotation.

The arms down technique should be used at the end of both round offs and flic flacs whenever leading into a skill that must travel long, such as flic flacs or whips. However, when leading into a salto that requires height, the takeoff position should be more upright to help the gymnast set the skill upwards, this is easily achieved by simply increasing the moment of inertia by keeping the arms at the ears out of either the round off or flic flac. I started with this technique at the start of 2015 after hearing about it through a video of Scott Hann, the South Essex Gymnastics Club director.

I do understand that to many coaches who think only in terms of aesthetics and how they have been coached the arms down technique seems rather unconventional or foreign, so I thought I would provide a few examples of top artistic gymnasts using this technique. In the following video examples you can see how the gymnasts keep the arms down for the flic flacs, but stay in flexion at their ears for the following salto.

Male artistic gymnast example – Kenzo Shirai – I recommend that you slow the video down to 0.25 play speed if you are able to, as it is easier to see the arm action at that speed.

Other male gymnasts who use this technique include Fabian Hambuechen, Daniel Purvis, and Epke Zonderland.

Female artistic gymnast example – Simone Biles – Once again, I recommend that you slow the video down to 0.25 play speed if you are able to, as it is easier to see the arm action at that speed.

Other female gymnasts who use this technique include Beth Tweddle, Claudia Fragapane, and Aliya Mustafina.